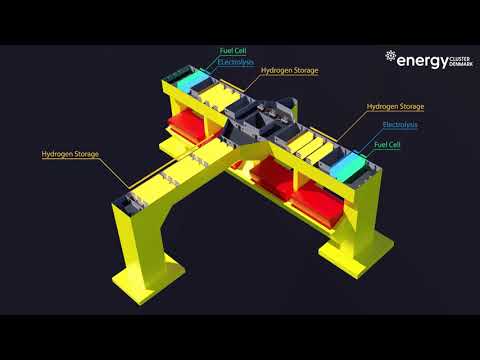 Renewables in oil and gas

CO2 emission from the actual O&G production (extraction and processing) is substantial.

The cost of offshore renewables has come down rapidly, making renewables a feasible alternative to other power generation sources.

New offshore renewable technologies that are feasibly in deeper waters and harsh conditions are emerging.

Driven by the increased focus on climate change and sustainability the general public and some shareholders/investors are increasing the pressure for operators to reduce the environmental impact of operations. E.g. the environmental cost per barrel of oil produced is becoming a key CSR parameter.

Renewables can provide increased flexibility in the design of O&G operation both in new field developments and especially in expansions / late-life upgrades.

Moving part of the power production away from the top side can increase safety in e.g. in regard to vibrations, noise, carbon monoxide, ATEX, etc.

Greater power capacity and a reduced cost of energy.

Increased safety, both from the lee/harbor effect provided by potentially removing hazardous equipment from other manned platforms on the field.

Technology is built up of High TRL subsystems and standard components from O&G and offshore industry.

The technology is designed for the exploitation of high-energy sites.

The O/G Decarb innovation project will examine the possibility of using a combined wind and wave technology on a floating foundation to store wind and wave energy that can convert electricity into hydrogen via electrolysis:

"This is an exciting and innovative project, which Total is supporting because it has the potential to solve one of the challenges of electrifying production platforms using offshore wind produced near the platform," says Ole Hansen, Head of Development, Business & JV Management at Total E&P Denmark.

"By examining how wave and wind energy can be converted into hydrogen, the study can help create a reliable green energy supply for platforms that can be used on days without wind," he says.

Reducing the climate footprint
Partnering with Total in O/G Decarb are Floating Power Plant A/S, the Danish Hydrocarbon Research and Technology Centre, DTU Wind, Hydrogen Valley, the Danish Gas Technology Centre and TechnipFMC. The project is being facilitated by the Energy Innovation Cluster and supported by the European Regional Development Fund.

In addition to ensuring that the production platform has access to a stable source of renewable energy, the project will also examine the possibility of integrating any surplus production of hydrogen into the gas sent ashore.

"If we can reduce the climate footprint of energy-intensive oil and gas production while integrating a larger proportion of hydrogen into the natural gas produced, we’ll be a step closer to climate-neutral offshore energy production. The new innovation project is therefore relevant for Denmark," says Glenda Napier, CEO of the Energy Innovation Cluster.

Identifying the potential
In recent years, offshore wind has developed extremely positively. The price has dropped and offshore wind energy can now be produced in deepwater and harsh environments – for example, through the use of floating foundations. Anders Køhler, CEO of the company Floating Power Plant, sees a market.
"It’s not profitable to establish traditional offshore wind at the depths where offshore production typically takes place, but floating offshore wind has potential. We’re thankful that Total and the Regional Development Fund share our vision to explore this new market," he says.

The project also presents some major technological challenges.
Morten Willaing Jeppesen, CEO of DHRTC, sees the project as a perfect opportunity to explore the potential for significantly reducing CO2 emissions from offshore oil and gas production.
"It will allow us to identify technological gaps that we need to fill on the journey towards an alternative energy supply with a greater share of renewable energy," he says.

Thea Larsen, CEO of the Danish Gas Technology Centre, sees the same potential:
"The power-to-gas solution is a key component of the future energy system. So the innovation project is an interesting opportunity to identify the potential of integrating offshore hydrogen production into the existing gas infrastructure," she says.

Jørn Kristian Lindtvedt, Business Manager at TechnipFMC, sees renewable energy sources in combination with green hydrogen production as a 'key element' in the energy systems of the future:
"We’re delighted to be able to contribute skills across offshore energy and green hydrogen technology with a view to decarbonising the Danish oil and gas sector," he says.

- Making the energy supply for the production of oil and gas fossil-free in the long term.

DNW GL has been awarded the contract to support the project on rules, regulations, and certification.

The project will, with FPP’s combined floating wind and wave technology as the basis, develop and adapt new designs and business concepts, for utilization in combination with the extraction of hydrocarbons. This is an emerging market but with significant potential.

An advisory board for the project; “De-carbonisation of Oil & Gas Production – by cost-effective Floating renewable Technologies”, has been established comprising Equinor, Sealand Projects, EIC, DHRTC (DTU), Maersk Decom, OGTC, and Aker BP. The advisory board first met on the 20th of November in order to review the requirements defined for the concepts under development.

The role of the Advisory Board will be to provide input and feedback at key stages of the project. This includes 3 meetings to review the engineering phases of the project, as well as input to the market analysis and business case development tasks within the project.

The article was published on EnergiWatch.dk on the 22nd of July 2019.

As planned, the “De-carbonisation of Oil & Gas Production” project is now entering its 2nd stage.
In the first stage, 3 concepts based on FPP’s combined floating wind and wave technology have been developed for utilization in combination with the extraction of hydrocarbons:

The development of these concepts has included the production of high-level system specifications, designs, and performance assessments, as well as an outline business case including an economic assessment of each concept.

The project partners have chosen to progress the “Direct intermittent power” concept to the next development stage and will complete a light FEED design by the end of September. The concept will undergo basin testing in August 2020.

The 3 concepts will also be presented to the project associated advisory board, consisting of Equinor, Aker BP, OGTC, Sealand Projects, EIC, DHRTC, and Lars Banke, for further input at the end of April

To kick-off the project; “De-carbonisation of Oil & Gas Production – by cost-effective Floating renewable Technologies”, we brought together all our partners Lundin Norway AS, APL Norway AS, Semco Maritime, CEFRONT, and Aalborg University at Floating Power Plant's Copenhagen office, for a two-day workshop and of course a nice team-building dinner.

The partnership has been granted 4,79 mDKK by the Danish EUDP - Det Energiteknologiske Udviklings- og Demonstrationsprogram for the project; “De-carbonisation of Oil & Gas Production – by cost-effective Floating renewable Technologies”. A project that will, with FPP’s combined floating wind and wave technology as the basis, develop and adapt new designs and business concepts, for utilization in combination with the extraction of hydrocarbons. This is an emerging market but with significant potential.

Timeline of deliverables and milestones